My Dream of You

(Following is an excerpt from an interview the Irish Independent did with the late Nuala O'Faolain, who died this month of cancer. Read the whole interview here. The title of this post is that of O'Faolain's second book. With thanks to Minnesota Matron.)

I think look how comfortably I am dying, I have friends and family, I am in this wonderful country, I have money, there is nothing much wrong with me except dying.

When I think of how privileged I am. I had two brothers who died of drink and they died miserably and under- privileged and here I am as usual the lucky one in the family."
Think on that, on your sunny, breezy, glorious Memorial Day.
Posted by thefirecat at 2:37 PM 4 comments:

Political Correctness Does Not Grow on Trees

Nor, in fact, does it run in families. Two nights ago, my dad wondered aloud if poor Ted Kennedy's brain tumour was what had caused him in recent months to endorse Barack Obama. Then, being a sensical man, he ducked. Because he knew something was going to come flying at him from my end of the table.

Yesterday, on my way to the local hippie-crunch food store for more organic kale and carrots to juice (seriously), I saw a bumper sticker: I MISS RONALD REAGAN.

Is it wrong that my first instinct was to roll down the window and yell, "Hinckley didn't!" ?
Posted by thefirecat at 11:38 AM 1 comment: 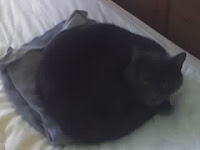 You fought a good fight, Mr. Man, and in the end I'm sorry I wasn't home to tell you it was okay to go. You were a friend and a companion to me, and to my beloved husband, in some very dark times. Like the Native American legends of Coyote, you were also a jester, often a klutz, and occasionally too dumb to be believed (like all those times you fell into the bathwater with me because you slipped on my washcloth). You drove me crazy by shitting in the bathtub whenever my parents or my in-laws came over, your unerring ability to search and destroy freshly clean laundry (pictured here refusing to give Asia her sweatshirt back), and let's not even mention that time you looked squarely at us to make sure we were watching, and then peed into my new leather briefcase, all over my journal.

In the last month, you'd made it pretty clear that the end of our time together was approaching. You did this in various ways, not limited to chronic constipation, refusal of all food except liverwurst and cooked bacon, severe dehydration requiring daily fluid replacement, utter incontinence, inability to jump onto furniture or ultimately even climb stairs, and a seizure brought on by low blood sugar. Still, each time I brought you to the vet for what I thought was a date with euthanasia, you perked up and pulled another life out of your furry bag of tricks--Coyote strikes again. This morning, you reached in and found that bag finally empty.

You will be sorely missed, little dude. Thanks for taking care of us all these years. I can only hope we returned the favour when it was most needed.
Posted by thefirecat at 10:16 PM 3 comments:

Random Thought #482 (from the Insomnia Files)

She-Ra, Princess of Stupid (and her cat, Mega-Paw)

This time last week Jonas, the oldest of my three cats, was receiving his second enema (the details of which are just about as horrifying as you're imagining right now, for both the recipient and the administrator) and about to begin a course of subcutaneous fluids to attempt to forestall permanent kidney failure.

Without going into too many of the gory details, suffice it to say that it wasn't a good week for either of us. Jo spent two days too weak to do anything but sleep--unable to walk, eat, drink, or protest when forced to suffer the various indignities of kitty rehydration, which sadly included peeing on himself where he lay. Hey, I said I wouldn't go into too many of the details. I didn't say I wouldn't mention any of them.  My dad and I discussed possible locations of interment relative to our groundwater source, and I went so far as to get the shovel out of the barn.

Then, mysteriously, Saturday evening at 6:00 he staggered upright and lurched across the kitchen--straight through his unused food dish, scattering kibble everywhere--to a patch of sunlight near where my dad was cooking. Sunday morning he started to eat. And, true to his normal self, hasn't really stopped since.

Yesterday morning, right after my alarm went off, he looked at me next to him on the bed and promptly fell over into a seizure. Yipes. Off to the vet we went (again) for more violations from behind (him, not me). He stayed the afternoon this time, and came home with a diagnosis of vastly improved kidney function but mysteriously low blood sugar. Since it's really hard to feed a cat jelly beans, he's got a dextrose solution made for cattle that now goes into his drip line in the evening. He's also got a bizarre blue IV catheter port on one of his front paws and a whopping edema in the other paw, making it look like a Muppet paw or something. Thus, his superhero immortal nickname: Mega-Paw.

A moment ago, I just switched out a fresh bag of Ringer's and managed not to contaminate anything, explode a bag of sticky fluids all over myself, or stab myself with an errant needle. As I've not worked at a vet's office since early 2001, I was quite proud of myself, and as victory surged through me, I shot both arms up in the air and hooted, "I have the power of Greyskull!"

My dad, walking through the kitchen at this particular moment and unfamiliar with pop culture cartoon series of the mid-eighties, is now under the impression that I have the power of numbskull, and isn't sure I should be advertising it quite so proudly.
Posted by thefirecat at 11:40 AM 2 comments: