I had a bit of a surreal experience today. I walked into a local antique store, just browsing. I turned a dark, rickety corner around a hatrack and a stack of old 78s (remember those?) and saw this hanging on the wall: 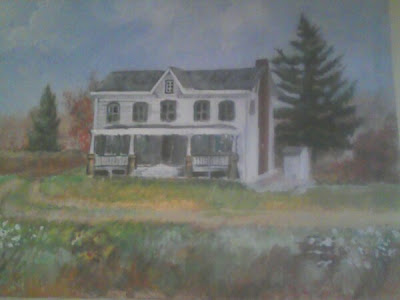 Those of you quick on the uptake might recognise this dwelling. I, in fact, recognised it so well that it took me a minute to notice that there was something peculiar about it. Like, the fact that it was hanging on a wall in some stranger's business establishment (well, that and the fact that they took liberties with the location of the outhouse and the enormous pine tree).

Have you ever walked into your own life head-on, and taken a moment to register the fact that it's indeed yours, and that to everyone else you are just a stranger? My best friend has this happen to him all the time, both because of his father and because he's pretty well-known these days in his own right. But it's never really happened to me before. My friend Noni (hi Noni!) says it's a sign from the cosmos, and I agree, but I'm not sure what it might be saying other than "You are about to be $175 poorer."

Maybe it's just a reminder, though. Either that we are all outsiders, looking in--or that we are all insiders, coming home again to a place we know so well we forgot how to look.
Posted by thefirecat at 4:13 PM 1 comment:

I just spend some time catching up on my friend Al's blog. Haven't been there in far too long, apparently. Oops. Either that or I think everyone's a slacker like me. Anyhow, it made me think about just how slack it is, exactly, I've become. And it led me (among other things) to ponder this.

One of the reasons I feel like a slacker (other than, of course, my complete inability to update my blog on anything resembling a regular basis) is the fact that I sleep noticeably later than everyone in my household at the moment. In part that is because the other two members of it are in their sixties and have embraced that transition to late-adulthood known as "Getting Up at the Ass-Crack of Dawn Because Your Body Has Decided It Is Done Lying Around," but it is also apparently because (I have figured out) I set unrealistic sleep expectations for myself and then get angry and down on myself when I don't fulfill them and get up as early as I've set the alarm for. How's that for fucked-up stupid? To be angry about myself for needing sleep. Especially since my sleep needs were radically altered twelve summers ago by that teeny niggling thing known as, oh, cancer. Yeah. Amazing, the way that six-letter word fucks with even the most unrelated, teeny aspects of your life that you didn't realise were so precious to you. Like the ability to recognise when you are hungry, or tired, or hanging upside-down from a tree branch over the Delaware River in your undies.

Ok, I'm making that last one up. Or if I'm not, I'll never admit it in public. You can't prove it was me.

However. Back to the sleep thing. The reason I figured this out on this particularly (lovely, breezy) June morning is that I was going to meet my dad for a run today at 9, which involved getting up at 7. Which is totally doable, I left the house at seven for an entire semester this spring, and seven was an unheard of luxury back in the days of community college teaching, remember? Maybe not. Me either. It was a long, horrible winter or three. Anyway. I stayed up until 10:30, which actually isn't necessarily too bad, but then I tossed for a bit, and because of the antibiotics and stuff, got up to use the bathroom about forty-seven times, one of which was at FIVE AM (totally annoying because my body goes all neolithic-circadian on me and is, "Oh! Daylight! Try to wake up!" Um, how about no.) So I turned off my alarm at ten to seven. In my infinite wisdom. Because I needed more sleep. This seems normal, right? But this is where it gets stupid.

Because I realise part of this is the antibiotics I'm currently on for a dental mishap that ganged totally agley, but a good part of it is the inability to go to bed at 10:00, or even 9:30, which--let's face it--is just how much goddamn sleep I need. And for some reason, I can't get my brain over that. WTH?

Oh, yeah. Speaking of which. The antibiotics? I stopped taking them yesterday. I'm not done them, and I know that's a medical no-no, but seriously people. I could not eat. This is the stuff they give people with giardia, or flesh-eating bacteria that's trying to take their face off. (Oh, wait.) And a dinner of baked chicken thigh and boiled sage potatoes? Made me nauseous. The only thing that hasn't made me nauseous in five days is yoghurt. And that one bowl of Lipton's chicken noodle soup, though I did get fairly urpy during class that night.

And the kicker--the worst part of all of this--is that despite my inability to eat, and my massive ability to eject food from every known orifice with remarkable speed and consistency (me, not the food)--I haven't even lost any weight.

No wonder I woke up this morning dreaming about homemade gourmet ice cream.
Posted by thefirecat at 9:22 AM No comments:

Everyone Should Have a Samira

Sadly, I don't get to take credit for most of this post. Most of it originated with my friend Samira, and the number of times she's had to listen to the story called That Time in Grad School (Round One, MFA) When I Walked into the Comps, Got Handed My Questions, Turned to the Person Next to Me, and Said, "What the Fuck Is Anaphoric Free Verse?" (Needless to say, I have never again forgotten in the intervening years, probably never will, and my current graduate advisor for the MA program is fond of teasing me about it.)

Anyway, earlier today I got an email that eventually morphed into this list.

Anthropomorphic Verse: Poetry read by a mouse wearing a waistcoat and horn-rimmed glasses

Anagrammatical Verse: Poetry that sounds exactly the same when read either forwards or backwards

Anaphylactic Verse: Poetry that makes it so hard to breathe, you’d rather stab yourself with a needle

Anaphasic Verse: Poetry that suddenly, and inexplicably, splits itself in two

Antibiotic Verse: Poetry that fights infection (this one was in response to a concurrent conversation about my recent dentistry woes)

Antidisestablishmentarianism verse: the longest poem in the English language, but nobody knows what it means or how to use it in a sentence

Nota Bene: Amphoric Verse should not be confused with Canopic Verse (poetry that has been prepared for its journey through the afterlife)

Amphibious verse: poetry written by frogs; alternately, poetry to be read one if by land, two if by sea

The best part about this whole thing is that Samira was never even an English major and doesn't consider herself well-read, an opinion I personally do not share. She knows more about Jane Austen than I do, for heaven's sake. So what if most of it comes from the BBC Colin Firth version of Austen, not the Jane Austen version of Austen? A better Mr. Darcy there could never be. But I digress.

Every once in a while, someone enters your life who just gets you on a molecular level. Samira is so often that person for me.
Posted by thefirecat at 9:17 PM 1 comment: