My friend Jimmy is an animal in red running shoes. This past week, he (along with four other Marines) completed a 177.5 mile run, starting in Philadelphia and ending with the completion of the 33rd Annual Marine Corps Marathon in Washington, DC.

Then he went out for beer and nachos.

This was not a relay run. This was five Marines (plus a hell of a driver and a trailer full of gear) running forty miles per day. For five days in a row. As alluded to in this post's title, they did this as a fundraiser for the Injured Marines Semper Fi Fund, a non-profit dedicated to raising money to benefitt injured Marines and Sailors.

The Team had a fundraising goal of $25,000 and they're a bit short. If you'd like to donate, or even just send them a message telling them they're crazy running fools, please visit the Tun Tavern Runners' web site. Tell 'em FireCat the Gatorade Lady sent you. 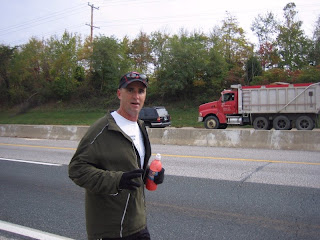 (This photo was taken around 2pm on Friday, some 100 miles into their journey; thus, you'd think Jimmy would have the decency to at least look winded.)
Posted by thefirecat at 10:12 PM No comments:

Sometimes It's the Simple Things that Trip Us Up. Like, Say, the Sun.

My poor dad. He has tried faithfully every week this semester to record CSI for me, since I teach on Thursday nights and am usually not home until well after ten. (For those of you wondering, yes he does record The Closer and Saving Grace when I teach on Monday nights.)

Almost every week, this results in Epic Failure.

What's interesting is that the Epic Failure is of a different variety nearly every week. My father is both wise in his advancing years, and an educated man. He learns from his mistakes. Setting up to tape the season premiere last month, he forgot to hit "enter" after entering all the information. By the time I got home, Warrick had already bled to death all over Grissom, and Sara was in the latter's office consoling him. (Fortunately this was not a plot twist that had gone unexpected, since Gary Dourdan was leaving the show).

The following week he got everything right, I think; either that or I cancelled class, because I distinctly remember the episode. We were starting to settle into a routine. Date, time begin, time end, ENTER, insert DVD that is actually of recordable quality, turn TV off but leave box set to CBS (not Spike, which shows some Smackdown shit Thursday nights that I couldn't be less interested in) rinse out wine glass, retire to bed. Awake in morning to grateful daughter brimming with anecdotes from last night's episode.

Then George Bush went and fucked with Daylight Savings Time.

That's right, folks, our DVD/VCR automatically set itself back an hour on Saturday night, and no one noticed until I came home and squinted at the LED display to make sure it was recording properly. It wasn't. But it will be in, oh, about eight minutes.
Posted by thefirecat at 9:44 PM 1 comment:

This morning's New York Times contained an article about the health disclosures--or lack thereof--of the current batch of Presidential and Vice Presidential nominees. Though I don't usually like to give myself indigestion that early in the morning, I perused it over my morning tea and waffles, and came across a paragraph that stopped me briefly.

The records mentioned that in 1968, about eight months after his capture and after some particularly brutal beatings from his North Vietnamese captors, Mr. McCain attempted suicide, trying to hang himself with his shirt.

Now while I'm not a particular fan of Senator McCain's politics, his policies, or his habit of wandering around the stage during debates while his opponent is speaking (what was he doing back there? Looking for his dentures?) and I am not of the belief that having been a prisoner of war necessarily qualifies--or disqualifies--someone from being a head of state, I just wanted to go on the record here.

I honestly don't think there is a person between here and North Vietnam that can blame the Senator for that. Most of us, myself included, wouldn't have lasted eight minutes, let alone eight months.
Posted by thefirecat at 10:35 PM No comments:

She Has a Point, Folks.

But then, Campbell Brown so often does.
Posted by thefirecat at 10:06 AM 2 comments:

How frighteningly accurate is this?

Posted by thefirecat at 6:36 PM No comments:

I can't say this any better than my friend Mary, so I'm not even going to try. Please, please, please go read the most recent post on her blog if it's the last thing you do before you go to bed tonight. Please. It's so worth it.
You can even ignore Sarah Palin's misuse of the objective case. Just this once.
Posted by thefirecat at 10:35 PM 2 comments:

And I have one of the more affordable ones.

FAIL.
Posted by thefirecat at 10:37 AM No comments:

I am not your "friend." Kindly refrain from addressing me as such, or else I shall have to assume that, much like your party's predecessor, you are simply ignoring my (daily increasing) segment of the population. Might not be a bad tactic, come to think of it; we are royally pissed off after eight years of being ignored, not to mention it seems to have worked well for George W.

But anyway. If I were given the opportunity to ask a question, it would be this: why do you keep wandering around like a geriatric golden retriever whilst Senator Obama is speaking? Myndi just emailed me from Chicago wondering the same thing, and I suggested to her that it's your prostate. Perhaps you're pacing like that to distract yourself from thinking about how badly you have to pee. Either that or you've lost your dentures.
Posted by thefirecat at 10:47 PM No comments:

Ok, I'm warning you, there is a high weirdness factor to this quasi-injury report. And I'm doing all the right things for it, and I'm not concerned, and it doesn't even really hurt. I just wanted to report the strangeness of the human body. Or, more specifically, the FireCat body.

So I've got this very tight tendon/ligament/thingie in my left foot this past week. No big deal, I'm just stretching it and massaging it and icing it. It's not that big scary one that gives me and Running Friend Kat both the woogies, but it's near there.

Just now, on my way downstairs to get some iced coffee so I can work on my research paper without bonking my head on the keyboard, I stop to massage it on the edge of a stair, as I often do.

I can hear this thing. Actually, audibly, hear it as it rubs back and forth across the step: plonk, plonk, plonk. Just like a little, tiny foot-banjo.