In the Kitchen of Memory

This is not the easiest thing for me to write about, because when I remember my husband, he is always in the kitchen.

It's true, too, that whenever I imagine my childhood, and my mother, she is always at the sink doing dishes, or at the massive oak table with the lion's feet pedestal, doing her crossword in the southern light, or (altogether too frequently for my taste) on her knees washing and polishing the hardwood floors she always wanted and my dad finally put in a few years ago. I grew up in that big, pre-Victorian farmhouse, and the kitchen takes up the entire back half of the first floor. It may even predate the rest of the house; though at first glance that seems backwards, it's architecturally feasible. The ceiling in the kitchen is lower than anywhere else, and at certain seams and junctures of certain bearing walls, it appears that the kitchen is what's holding up the house, not vice versa.

Obviously, on a sociological level that's symbolically true for everyone. It's true for society as a whole, it's true for all Irish-American immigrants, and it's true for all East Coast farmers in post-colonial America through the 1800s. But in our house, it may well be literally true as well. A pencil, ball bearing, or other round object dropped anywhere in that house will roll towards the kitchen. Similarly, a teenager doing calculus or a father balancing the checkbook would gravitate there.

These many years later, it's still true. In search of better light, my father will spread his photographic proofs across the table to ascertain which half-stop difference in development he likes better. Though it's often distracting as hell, I'll frequently grade student papers there. My mom still does her crossword puzzles there every Sunday afternoon.

But even more nuclear than this: the kitchen is the central focus around which my marriage was built.

My husband wooed me in the kitchen. While most romances happen in bedrooms, along starlit piazzas, city streets, bars, riverbanks, theatres....ours happened in my tiny apartment kitchen. This beloved, funny man is a graduate of the Culinary Institute of America, and cooking for me was his language of love. Through the meals he prepared, and the care he took, I learned his moods, his fears, his secret childhood dreams, and each twist and turn in the endless rooms of his heart. He marked milestones in our courtship through ingredients, and expressed his deepest emotions through spices or garnishes.

What made our marriage real for me, as much as the rings on my finger and the new last name on my mailbox, was the drawer full of CIA-issued knives in the kitchen where my rusty, mismatched paring knives once lay, and his stockpots nestled in among my frying pans. As a single man living first with his parents and then in a cramped, dim studio apartment in Pennsylvania, those F. Dick & Sons travelled with him in a cracked vinyl roll, oiled and sharpened with his pap's steel more regularly and lovingly than I watered my plants, and now they were arrayed carefully in the drawer of his choice, within easy reach of both the stove and the counter workspace, and the knife roll was tucked away behind the seldom-used Bundt pan, gathering dust. More than anything else, this was to me a promise that he was not leaving. He was home.

There Was No Picture for "Forgot to Get My Widget"

I've seen these on several scribblers' blogs, went and got one, told my friend fiat about them, and proceeded to not post it here.

My mother only has three rules for story-time at her local library, and she implements them firmly. As a life philosophy, they're not too bad either.

1. If you sit in front, you have to sit flat on your bottom so that others can see.

2. You can't walk up or down the stairs any faster than the person in front of you.

3. You don't have to pay attention, but you have to be quiet.

I mostly have problems with that last one.
Posted by thefirecat at 9:05 PM 1 comment:

I often joke to my students about where Inspiration finds me. I call her poem faerie, long-walk faerie, shower faerie, I-just-submerged-myself-nose-deep-in-potting-soil faerie, middle-of-the-lake faerie. Because of poem-faerie's perverse sense of humour, I try to carry a journal with me almost everywhere, to tempt her, or to tease her. Go ahead. Think you can find me unprepared here?

I am also frequently visited by Inspiration's backhanded friend, Goading. Goading peers out at me from other people's writings, from bookstores, from the clean expanse of freshly changed blue floral sheets, from the antique writing desk in my mother's living room. Goading works in tandem with Inspiration, but more often he conjures up a gossamer-thin ghost-image of Inspiration, which disguises the real nature of the beast: Work.

In the literal, though slightly archaic, etymological sense, thus:

in·spire
(a) to take into the lungs in breathing; inhale
(b) to infuse (breath, life, etc.) by breathing

Even in this instance, it's problematic. Either I'm doing the breathing, or someone else is. Did someone inspire me, and now I'm duty-bound to pay it forward, to breathe life into paper, into ink?

One place I am generally incapable of writing is while running. My father finds this inexplicable; he drafts entire sermons in his head while circling the cinder track. Not me. When I'm running, that's all I'm doing. It takes all of my concentration to run--not so I won't fall over, but so I won't stop. And what stops me when I'm running, if I'm not concentrating, is not my legs. It's my lungs. Most people don't like to be out of breath, and I'm no exception. I spent a good deal of my allergic childhood and asthmatic adolescence this way, and now I do this three to four times a week? On purpose? Madness.

Running, for me, has two purposes. The first, which can possibly be only understood by other long-distance runners, is to get rid of the little men who bounce around my thigh muscles. The second, simply, is to breathe. To inspire, and to expire. Literally, every time I run, it is life and death. I breathe in, I live. I breathe out, I die.

Where do I find this life, this inspiration? I don't know. I've never seen the wind. But I know that without it I will stop breathing.
Posted by thefirecat at 9:03 AM 4 comments: 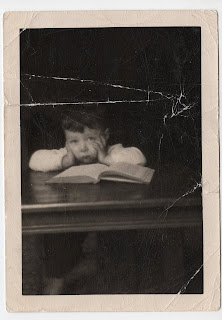 I get both my dread of homework and my chubby cheeks from my dad's side of the family, apparently.

(My mother's side is responsible for the nose that changes shape as I age, the incredible thicket of unmanageable hair, and the inability of my feet to reach the floor from any given seat.)

Posted by thefirecat at 5:24 PM No comments:

Tangled up in Seuss

Lately I can't get over this bit of silliness. It's peculiarly appropriate, too, given that the cat in question turned 50 this year.
Posted by thefirecat at 6:17 PM No comments:

Has Anybody Seen My Pants?

The problem with having a household of three people roughly the same size, one of whom has a tendency to wear men's clothes like her dad but the same size and style underwear as her mom, is that you run the very real possibility of losing your clothes forever. Every time I get undressed for bed and put my clothes into the hamper, I take a moment and wish them a fond farewell, because Lord knows when I may see them again. To wit: my new capri-length running tights. We assumed at first that my dad had done that load, looked at them, decided that capri-length on me equals ankle-length on mom, and put them in her pile when folding. This seems not to be the case, because mom and I just ransacked her entire drawer of gym clothes.

This leaves an even more horrifying possibility. The one that says he looked at the girth of the ass on these tights and realized they must be his. Of course, I'm not sure what that says about his anatomy, that he's able to look at the front and go, "Yeah, okay, I could fit my parts in there, no problem." And I'm not about to ask.

We also have a sock auction around the kitchen table once a week: "So I got this pair of sort of green ragg wool socks which I really like, but they're not technically mine, does anybody belong to these?" "Oh, yeah, those are mine. Are these your black dress socks? Because I already have two pair, so these can't be mine."

Fortunately there is not this issue with bras. You can totally tell those apart. My mom's are the cool ones, fun ones, and pretty ones, and mine are the ones that are designed by the Army Corps of Engineers.
Posted by thefirecat at 9:56 AM 2 comments: