Is That a Knitted Cat in Your Pocket, Or Are You Just Happy to See Me? 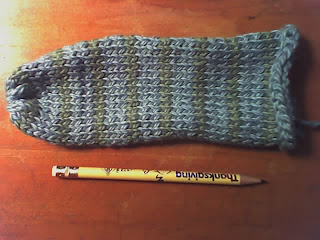 This began as an experiment in stripes with leftover yarn from a blanket knit for my friend Matt's newly adopted son. Mostly because I had nearly a skein of each left over, and I liked the two colours together, I flipped back a few pages in the pattern book and began knitting a stuffed kitten (my other options were bear and bunny).

The gathered end will one day be the catt's butt (is that anything like the bee's knees, I wonder?) and somehow, the pattern assures me, once I add arms, legs, tail, and stuffing, I will be able to fashion the flat end and baste it in such a way that it will grow ears. I'll let you know how it all turns out, but so far I'm skeptical.

Especially since earlier this evening I was sitting in my therapist's waiting room--my very Christian therapist, mind you--and I took this off its needles and sewed the seam up the back. At which point I held it up to inspect my handiwork and immediately blurted out loud, "Oh! A penis cozy!"

I suspect I'll be visiting this therapist for quite a bit longer now.
Posted by thefirecat at 10:35 PM

OH dear... i began choking on my subway sandwhich, laughing hyterically at the penis cozy remark.

please do post a picture when/if it becomes a cat.