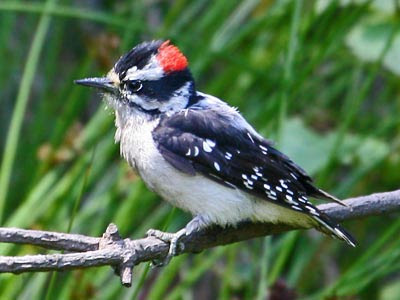 Yesterday at about supper time, I was presented with this fellow. My neighbour called me over by asking if I'd ever taken care of a bird with a broken wing.

Well, no, and I have no intention of starting now. For one thing, I have two very hungry kitties. For another, I would presently find myself without a home, because frankly certain members of this domicile (namely, the ones with their names on the mortgage) have had About Enough of the coming home with the wounded beasties, already.

Technically, his wing wasn't broken, either. It was sort of....gnawed on, looking for all the world as if, before pulling away from whatever was clamped firmly on the other end, Mr. Bird forgot to tell his wrestling partner to please let go. (In my world, of course, the aggressor would most certainly have obliged--but that might just be my personal experience with klutziness: when caught in the act with anything, or even distracted momentarily, I am bound to drop it, whether or not it's in my mouth--though stolen or sneaked-in cookies are not an exception. As a stunning example, I randomly flung salad across most of the dinner table yesterday, for reasons entirely unrelated to the conversation we were having at the time. But I digress.)

On his return f 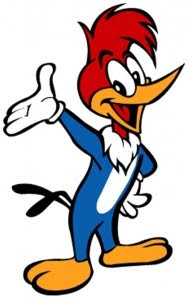 rom the County Wildlife Refuge, my neighbour told me he was impressed that I'd known it was a woodpecker. Really? Didn't we both grow up on this stretch of river? Given the black-and-white stripey spots, the red head, the bill useful for boring holes in trees, and the fact that earlier yesterday morning I'd seen possibly this very bird--well, pecking wood--what else could it have possibly been? Maybe he was expecting a woodpecker to look more like this?

It's not that my neighbour is stupid, either. Far from it. The man has a PhD in some sort of clinical pyschology, and has taught seminars at Princeton, for god's sake. I'm just continually astounded by how unfamiliar most of us our with our surroundings. With, for instance, the fact that while Louisiana's Gulf Coast might not be the only place there are shrimp Mr. Randy Prescott of British Petroleum Not To Get On a Political Tear, but--to even leave out of the equation the livelihoods of Louisiana and Mississippi shrimpers--it's the only place these particular shrimp live, and I suspect that to these individual shrimp, as much as shrimp are able to have an opinion on things, it matters quite a bit actually, whether they live or die.

Am I naive for wondering if these two mindsets are, at the end of it, any different? I know most of my human neighbours by name (even if I can't pronounce some of them, since my Spanish still generally sucks). Why is it that so many of us don't bother to learn the rest of our neighbours by name? Am I still a starry-eyed, Thoreau-worshipping romantic (well, yes, but there's a qualifier coming) if I maintain that it might make the beginnings of a difference?
Posted by thefirecat at 8:53 AM