Update and a Tour

No, my beloved thirteen followers and various hangers-on, I have not abandoned you. I have taken you with me to my new digs in Doodlehem (also known as Bethdoodle). In the interim, there were finals, physical therapy, more finals, more physical therapy, many many times my weight in books, and the reassessment of everything I owned, and just how damn much of it there was.

And then there was the whole Internet fiasco.

But I'm here, the internet's here, I'm pretty much entirely unpacked, and what's more I think I'm almost caught up on finding homes for things. Well, ok, maybe not that last one. But it's getting there. Give me a break, I've been here nineteen days and I'm not allowed to lift anything heavier than my own sense of irony. I am, however, newly allowed to run in tiny, tiny increments. As such, I had the best seven minutes of my life this afternoon, even though they weren't consecutive (that's what she said. Oh wait. Wrong post.)

Anyway. I'm home from my rehabilitative walk/jog scenario (during which I confess to studiously wearing gear from only the most hard-core races I've run, so I am not confused with an actual jogger) and a post-workout trip to the laundromat, where I discovered what a bargain "dollar-wash Wednesday" truly is, given that it's Thursday and the machines are now all jacked up to $1.75 per load. Highway robbery. In any case, many of my friends and relations--yes, including Alexander Beetle in the unlikely event that he actually visits this blog (if he does, hi dad, sorry about trash night)--have expressed interest in seeing the new digs.

Ok, so it goes like this. I was far too lazy to put on shoes and socks and go outside in the rain to take a picture of the exterior, and besides, that’s a little too creepy these days, considering Google Maps and all the things you can do with it. Not like I wouldn’t want you to stalk me, but you know what I mean. 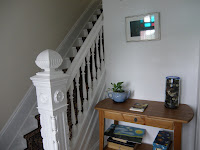 There’s actually a little more room than it looks like, enough for a 2x4 rug and a door that leads nowhere (actually it leads to the downstairs apartment, but it’s painted shut and I’m pretty sure there’s a wall on the other side of it. Which is convenient, since I don’t have any desire to go walking into Brian’s bedroom.) There are a lot of those in my apartment,as well as doors that actually lead places, and places that don’t have doors. 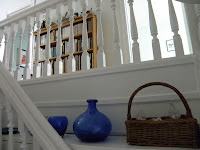 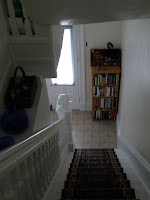 As you walk up thestairs, behold my ability to put bookcases just about anywhere. This is a very important talent to possess when you are a PhD student in literature, as you may well imagine, both because the apartments you inhabit will be cozy and hobbitlike, and because the sheer number of volumes you amass will frighten even your librarian mother. (By the way, the official count was 38 boxes. You heard it here first.) 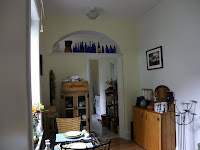 Now you come to the top of the stairs, where you notice there is some funky architecture and that, yes, they had to put a wall up in the middle of a lovely arch so that the kitchen wasn’t actually in the hallway. The dining room, however, remains in the hallway. That’s ok though, because the hallway is bigger than my NYU dorm room. This is good, as I have rather a lot of refinished kitchen storage cabinets, which will help alleviate the lack of actual kitchen cabinets (more on that shortly). Carefully not pictured here are a couple of piles of crap that have to go back to my parents’ attic because of same. 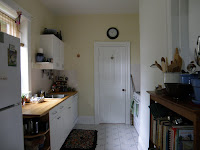 See what I mean? That’s all she wrote. Considering I haven’t used the dishwasher so far and don’t expect to, I’d rather have the extra cabinet space. Very sunny, though, which I love. What I do have, you’ll notice if you look carefully, is the second in a series of Doors to Nowhere. This isn’t an actual door, but a walled-in doorway. It turned out to be damn convenient and exactly the size of the bookcase that’s now sitting in it. Yes, I have a bookcase in my kitchen. Conveniently, it mostly has cookbooks on it. And my giant stockpot that doesn’t fit anywhere else, as well as my coffeemaker (ditto). Note stove conveniently hiding in alcove behind curve of hallway. Whoever converted this to apartments had some damn good luck in some places. This was one of them, since it seems that this is actually the width of that hallway, which presumably originally continued on to whatever happens on the back half of the second floor, also known as “someone else’s apartment.” 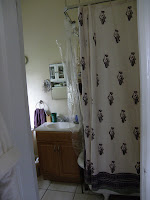 Say it with me now, “claw-foot bathtub.” The bathroom actually is as small as it looks, and thus this is as good as it’s going to get for pictures. Yes, I have a litterbox stuffed in there too. It’s truly awesome. And yet, it’s several orders of magnitude larger than any bathroom I ever had in New York, a town famous for putting claw-foot bathtubs in the kitchen in some neighbourhoods.
Anyway, behold it in all its bathtubby glory. The windowsill is a good six inches deep, too, which allows for storage of crucial items. Like books.

An interlude now about why I narrate tours through my bathroom; I started doing these (with hand-drawn maps and actual photographs) when I lived 3000 miles away from my parents in Spo-Vegas, and they wanted to see where it was I lived, as if it would somehow give them a clue what I was up to. Fortunately, most of the time it didn’t, but they enjoyed seeing the apartments anyway, since they didn’t get out there until I graduated, and so missed a couple of residences.
Ok. Meanwhile, back in Bethdoodle, meet the piles of crap in my living room, so situated because I don’t have an office yet. Hopefully that’s where that big pile in the bay window will end up. My dad just made the radiator table for me this week, so I would have someplace non-bumpy and cat-proof to put my tea in the mornings. Also, because, well, I have a lot of files full of crap, as you are about to see. 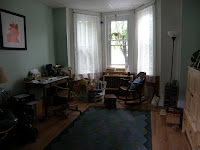 Told you. This room, in contrast to the bathroom, is not nearly as big as it looks from this angle. Or maybe it’s the four hundred bookcases flanking the doorway. In any case, what you also cannot see is the apartment’s one major flaw (I mean, other than not being rent-free or having laundry), which is that the desk is uphill from everything else. Like all old buildings, the floors in the apartment are a little less than level, and as I type this, my foot is hooked around the desk to keep me from rolling away from it towards the TV cabinet. The rug helps by catching me, but only sometimes. It’s fun, this acrobatic living room of mine. Also, pencils don’t stay put when you drop them. I try not to drop them. 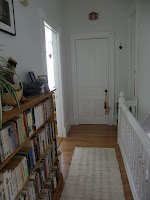 Let us continue on our way. Back into the hallway, and—oh look. Another bookcase. What a surprise. Also, another Door to Nowhere. This one is actually a door to… stairs. That lead nowhere. Actually, they lead to a wall, the other side of which is a mystical land known as “Matt’s Third Floor Apartment.” I’ve not actually met Matt, I think he’s rather like Mr. Tumnus, or something. (Actually, what Matt is, is a PhD student. Which, come to think of it, isn't all that different from someone you might find in back of a wardrobe.)

Also visible here is an Actual Door to Somewhere, one of two in the apartment. There’s a reason they have doors. It’s not safe for you there. Like Gene Wilder in Young Frankenstein, whatever sound you hear, do not open that door! The closet is currently under organization, and as such is a complete death zone, since by “organization” of course, I really mean “quarantine.” I brought more hangers home yesterday and hope to slay the Evil Closet Beast sometime before the world ends on May 21. Don’t hold your breath. Oh, and after the rapture, can I have your stuff? Since I have that kick-ass closet, and all. 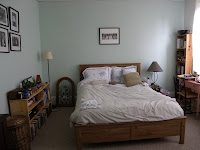 Chapter Six, the bedroom, wherein FireCat wishes she had done a better job of making her bed this morning. Truth is, I was planning on changing the sheets and doing laundry later, if the Verizon guy ever shows up. Not pictured here: more stuff. Also, Bookcase, The Final Frontier. The bookcase where old books with no home go to die. Also, children’s books I still read and anything I might be otherwise embarrassed to be caught with, such as my beloved Alex Bernier mysteries. Pictured here but entirely invisible: the two cats hiding under the bed, though one of them might be on the windowsill checking stuff out.

And now to recap, since we have run out of rooms and up against a wall (well, door): 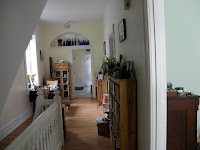 Itz mah howse. I live here. You don’t. And aren’t we all so very, very happy about that?
Posted by thefirecat at 5:41 PM

It's about freaking time! I keep checking and checking for an update of any kind on your blog.

Cute place. Glad you're all settled in. Thanks for the tour. Don't be a stranger! :)

This place is TOO adorable. I love the character of the railings, and all the homey little touches. At the same time, you've kept it clear of clutter which I am STILL trying to achieve in my own little house.

Love all the doors to nowhere. Jealous that you live next to Mr. Tumnus. He always seemed a friendly sort although a tad nervous for a goat.

So glad to see you settled and back on the DoCuckoo.