Grief is exhausting. Seriously, I was not prepared for how long it would take all my energy just to exist every day, for how hard it would be not to collapse in a slithering wailing heap of bones Robin is dead in front of everyone. My diss advisor. My writing partner. My students. My friends. The mirror. People at the grocery store. Sometimes out of the blue I will be shopping in the cookie aisle at Shop-Rite (as one does), and the goddamn Pepperidge Farm Chesapeake Farmhouse cookies with the dark chocolate and the pecans will attack me from the side and I'll be crying my eyes out before I know it, because we used to wolf them down by the little white sleeve watching 60 Minutes or whatever. Mostly I'm better about this, but everything is still harder than it was.

Grad school is exhausting. I'm pretty sure I don't need to explain that, but just in case I do: OH MY GOD PEOPLE. This whole semester has pretty much been me hanging on by my fingernails, catching up just enough to keep from losing my shit entirely, and waiting for this week to finally arrive when all I have to do is grade finals and calculate grades--oh, and write an entire syllabus for English 1 for the fall, and a course description for the spring catalog for the lit class I have to finish designing that now has to have seven people in it in order to run, and oh hey yeah, how about that dissertation because you're totally fucking on the job market starting last August?

Also, it has been medically exhausting to be me for various reasons every since they decided it would be a good idea to take my gallbladder out before it exploded (which it apparently promptly did, all over the little pan they put it in once they took it out of my abdomen, which is equal parts funny and horrifying and also ew), and apparently now harbouring a case of IBS, which is exactly as unpleasant as everybody says it is. And because I'm in my mid-forties--and can we talk about that for a minute, because how did that happen all of a sudden--and have survived an endocrine cancer, every single hormone in my body has recently begun going haywire all at once, the finer details of which I will spare you, but suffice it to say that I have had no fewer than six gynecological appointments since my spontaneous ten-hour trip to the ER in mid-February and am now on a first-name basis with my uterus. (Actually, it's the fibroids that have names. I call them Snap, Crackle, and Pop. Though "pop" is more accurately a description of the hemorrhagic ovarian cyst that got me sent to the ER in the first place. But I digress.)

It was a long winter. And I'm still trying to get to the bottom of the endless fatigue. 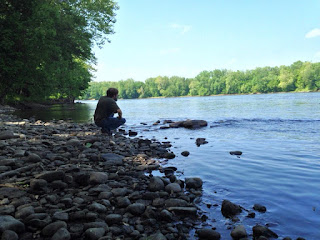 This guy. He is everything. He has been through so much, and he is still so alive and fighting so hard to return to the living, and I could not be more amazed and in awe of him. Twenty years later, we are able to open up to each other with trust in a way that I didn't think was possible, and if this is to be my entire life I will clutch it with both hands and bless it, because it contains him.