The other day, I looked up and realised I was surrounded.

These several acres used to be all of a parcel. Before the Revolutionary War, Daniel Sebring made nice with the local Indians and got himself a sizeable chunk of land along the river, which was subsequently passed down through his family, sold to Obadiah Taylor, and eventually divided into two large farms on opposite sides of the Old York Road.

A century later, in 1859, one George Vlerebone sold his farm--which up until then had encompassed the entire eastern half of what has since turned into my hometown--to his son John, who promptly subdivided the land. Meanwhile, on the other side of the road, John Hoagland's estate was doing pretty much the same thing. On our side, the original Vlerebone farmhouse (once the Sebring Tavern, one of the few stage stops between New York and Philadelphia) remained and two additional buildings were built: our house sometime between 1859 and 1861, and a general store sometime after 1868 when the railroad came through. After that, things get a little hazy for a while, but by 1950 this property and the adjacent Sebring Tavern were again owned by a father and his daughter, and the general store was eventually bought by the Knights of Columbus. 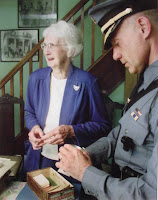 Fast-forward to 1978. The father dies, and his daughter puts his house and property up for sale. That's where we come in. The Knights of Columbus still own the building next door, but it's mostly vacant except for a small apartment, which is occupied by crazy Mrs. Norkevich and her pet crow, which frankly scared the bejesus out of me when I was little. There's a horse farm across the street, owned by the other johnnies-come-lately to the neighbourhood. (This is, of course, relative; most of the names in the local cemetery are the same names that appear on deeds of sale from Messrs. Hoagland and Vlerebone back in the 1800s.) Through a freak of zoning, we own the middle third of a semi-circular driveway, the ends of which are both owned by someone else; we do, however, purchase an easement along the back of our property, should our neighbour ever get possessed by demons and decide we can no longer use "her" driveway for access and egress.

1995. Knights of Columbus building is purchased by the people across the street and renovated into two apartments and an artist's studio. The owner's mother moves into the smaller apartment, and her youngest son into the larger.

2005. Our beloved next door neighbour, now 88, dies. Guess who buys the Sebring Tavern and its riverfront acreage. We are now the Munchkin in her doughnut. In a matter of weeks, the oldest house in town is occupied by eight Mexican immigrants who work in the stables across the street. This seems somehow fitting and right, and I think our neighbour would have gotten a kick out of it. And my comment is not a racist statement by any means. They're from a small town about 100 miles outside of Mexico City, and there are (in fact) eight of them. Tomás, Maria, Tony, Maria, Tomás's cousin, the two kids, and someone whose name or kinship to the others I've never been able to remember. We also have some other new neighbours: Rocky, Sweet Pea, and Buck, the miniature horses; Eddie, the actual life-sized horse; and Pedro, the shaggiest, stupidest-looking baby donkey I have ever met in my entire life. Seriously. He looks like a chia pet. Only he's not green.

When I was growing up, I was not a fun person to be around. Adolescence hit me hard, doubled with an undiagnosed serious clinical depression, and I spent much of the time between the years of 12 and 17 plotting my escape from these heartless people, to whom I was surely not related, and their oppressive household. Seriously. And that evil person who shared my bedroom? Surely she was conspiring with them.

When I went away to college, my relationship with my father sweetened again. We'd always been two parts of a whole, which was probably what made my teenage years so impossible--he knew when I was bullshitting him, because he could see right through me. He used to be me, once upon a time 30 years ago. My mother was a different matter. My two sisters had been much like her, so she was totally unprepared for this strange blond child who thought sideways and had extreme opinions and dated people she routinely couldn't stand. Oh, how we fought. Our relationship improved somewhat after I graduated college and moved 3,000 miles away to Washington State, but once we got back in proximity with each other, it was all over but the shoutin', as they say. Oil and water? We were more like water and sodium metal. Flash. Hiss. Boom.

Eventually, though, this problem was solved. Nine years ago this week, with one phone call. It was late on a Friday afternoon, and I managed to catch her before she left work. "Mom? The doctor called. The results are in. It's cancer. They want to take it out Monday." My dad met us at the hospital, making the forty-five minute drive from his office in just under twenty minutes during the Friday night rush hour.

I was in and out of the hospital, radio-isotope treatment, and my parents' house for almost two years after that, before finally getting it together enough to move back out on my own into an apartment that I stayed in for over five years, until my husband proposed. I never dreamed how much I'd grow to love that second-floor garden apartment, crammed as it was with bookcases, cellos, cats, and my writing desk where normal people keep their couch. The sliding glass door had a habit of locking whenever you closed it, so I spent a lot of time both air-conditioning the neighbourhood and shimmying down the balcony to pound on my friend Samira's door to retrieve what became known as my "idiot key."

This semester I taught a section on poetry to the students in my Monday night class. "The Death of a Hired Man" was required reading, which they all groaned about. Not only was it poetry, it was long. Weren't poems supposed to be, like, haiku? Or rhyme? Or be about someone from Nantucket? Soon, though, they eventually got it, what Robert Frost and I were driving at, what my mother had been quoting to us for most of our lives:

Home is the place where, when you have to go there, they have to take you in. 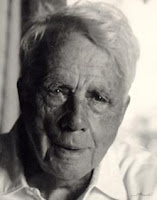 I should have called it something you somehow haven't to deserve.

Posted by thefirecat at 5:16 PM