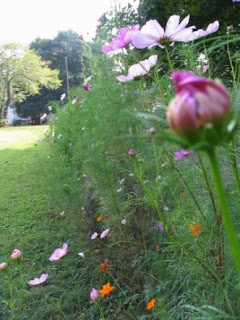 This afternoon I spent a very entertaining ninety minutes outside potting my philodendron cuttings, which had gotten too big for their britches and were taking over a glass beaker with their ghost-white snakey roots. It didn't actually take me an hour and a half to do this, of course; during the middle of it the next-door neighbour came over and we got into a protracted discussion of why things never travel in straight lines. This includes the property line, the access easement rights (as she now owns land on both sides of us and could theoretically one day tell us we can't use either end of the driveway), and the paddock fence that was probably supposed to run along the property line, but instead wobbles back and forth across it as if it's had too much dandelion wine. The reason for this discussion was proposed fence repair to keep her damned horses in.

This time last year, a small, shady perennial garden in upstate New York was the only thing saving me from utter despair. I knew that chances were slim that the flowers, herbs, and I would still be there in the fall, but I also knew that if I didn't make some firm commitment to putting down roots, I might as well walk out the front door of our small cottage and into the lake. And so I dug. I planted; I moved rocks and cut back stubborn hydrangeas that wouldn't stay gone; I arranged a small cairn of stones at one corner of the garden that was marked by a ridiculously large outcropping of bedrock (though the area was christened "place of many lakes" by the Mohican Indians, they could have just as easily called it "place of too damned many rocks" as far as we could tell) and tucked a pocket-sized brass statue of Durga astride her lion under the overhang. I watered. I weeded. I sat on the rocks and willed the spiderwort to open. Sometimes, I wrote in my journal. Mostly, I just sat.

May came. On Memorial Day, my parents came up and while my dad packed box after box of books and photographs, my mother and I painstakingly transferred my precious plants to pots and planters for the trip south. The alyssum that had just come into its own. The miniature irises Jayne exchanged for some of my silver lamium, whose small fuchsia flowers were threatening to overtake everything unless I intervened. Mint and chocolate mint, grandbabies of plants from Mother Ruth's garden, which had multiplied so much that I'd had to give some to Robin, and when I moved upstate to his neighbourhood I wandered over the hill one morning and stole some back. By then he had so damned much of it he didn't notice. My kitchen herbs, which I'd selected for my husband. My beloved lavender, in the only sunny spot in the front yard.

Refusing to believe I would be there longer than a few weeks, I left the garden in its various terracotta pots and window-boxes and put just about everything I owned in storage, with the exception of about four sundresses and some of my most precious books. Surprisingly, the plants lived through the summer. Even more surprisingly (to me, at least at the time), so did I. I don't think it's fair to say we thrived, but we lay still and close to the ground and waited out the sweltering heat that pressed down on us all through July and August.

By summer's end I had settled into the possibility that this was going to be a very long year, indeed. Somehow I got hired by not one but two community colleges, as well as my local library, in the course of 72 very frantic hours, after nearly nine full months of unemployment. One of the colleges hired me precisely sixteen hours before the start of their semester in a cosmic gesture of either serendipity or sheer insanity. I changed my address, and my driver's license. I even joined the local gym when it got too cold and dark to run after classes. Eventually I confessed to my mom how much I hated the daybed in what had once been my bedroom, and retrieved my futon from storage. We brought the houseplants inside, and my perennials as far as the screened-in back porch, and hunkered down for the winter.

I brought the perennials back outside a couple of weeks ago, and just this past Thursday I noticed the tips of Jayne's irises starting to show through the soil. The lavender isn't going to make it, but I've yet to successfully winter over lavender, so I'm not really too surprised. The lamium and mints don't seem to have fared well, either, which is a surprise. This is mint that has survived multiple transplants over three state lines, years of piss-poor watering, northern exposure, too much sun, not enough sun, near-catastrophic heatstroke in the back of my husband's Blazer, and Juno the 90-pound malamute. It must be true, then, that my mother is the fabled Great Cosmic Mint-Killer Deva, Destroyer of All Bearing the Genus Name Mentha. It's legend, how this woman can kill off a mint plant in less than a season. And we all know how hard it is to kill mint. Some of us spend our entire gardening careers trying.

I still can't bring myself to uproot these plants yet again and stick them in the ground in my mother's garden. I have no idea how long I'll be here, but I'm not ready to admit that it may be another summer. Not a day goes by that I don't utter some variation of "I actually have [insert object, title, article of clothing or furniture, etc.]--but it's in a box somewhere." If I have to spend another semester without the other four-fifths of my poetry collection and writing references, I may in fact flat-out commit seppuku. Sometimes, driving by the storage facility on the highway, I wave. Hello, Jack Gilbert. Hello, Nance. Hello, Paula and Eavan and dark-eyed Julia. Hello, Medbh McGuckian. Hello Hamish and James, read over and over in Scotland one summer. Hello, hello, sweet Jim McAuley, signed and dedicated Easter Sunday 1995 in the same watery blue fountain-pen hand that edited countless drafts of my master's thesis. Hello, life-in-a-box. Hello, memories of the smell of my husband's flannel shirt. Hello, dishes we picked out together. Hello, photographs of us. Hello, everything he left behind. Hello, everything that was once ours, that is now mine alone. And then, before I know it, the facility is in my rearview mirror and I'm still waving: goodbye, past.
Posted by thefirecat at 2:26 PM